Rennes is a relatively small city in west of France, in an area called Bretagne. Rennes itself is a capital of Bretagne. Around one year ago, when I got accepted in IAE-IGR Rennes 1, I was looking at Rennes information in wikipedia. The most famous spot in Rennes is Republique, which has a huge building looks like the city symbol. And also old houses from medieval era.

When I just arrived, that’s the first thing I ran onto. Yeah, Republique! Finally I can see it with my bare eyes. Apparently Republique is the city center area of Rennes and people can walk on pretty old medieval cobble stone walk and enjoy chic store boutiques to Saint-Anne area. Since the city is tres petite, in Saturday the city center can be very crowded and you will often meet any of your friends there because the whole city are there, LOL.

Almost all the branded stores Rennes has locating in Saint-Anne to Republique area, include Zara, galeri Lafayette, Andre, H&M, pull & bear, and so on. Unfortunately there’s no Louis Vuitton in Rennes although they have Hermes and Longchamp.

There are 2 kind of local transportation in Rennes, metro (subway) and bus. Both operated by the same company, which is Star. You can find any information in their websites, include when they are not operating due to strike or public holiday. Both of those often happened in France. Even in May, there are 3 public holidays which cause all the buses operated in Sunday schedule (means each bus will only come 1-2 times in an hour) and store open only half day!

Ikea – It’s very important to spend bus ticket to go to Ikea when you just moved to Rennes because they have tons of equipments. I bought 3 cooking pans for 7.9 EUR only, after almost faint when seeing a pan in the supermarket cost more than 10 EUR. Pillow, duvet, duvet case, cooking utensils, plates, glasses, spoons, forks, and so on.. I think they have the cheapest porcelain plates in town, which cost less than 1 EUR each (of course the cuter the design, the more expensive they will be).

Wherever you live, you can easily take metro to Villejean metro stop. If you have korrigo card, your life will be easier. But if you don’t, you can buy a carnet in the metro machine (or bus driver, if you take bus to metro) which costs 1.4 EUR each and valid for 1 hour journey. You need to composte or validate the carnet to the composter machine on the bus or metro, otherwise when the checker officer come, they will fine you around 45-60 EUR.

After arriving in Villejean metro, go out and find a bus stop for no 65 and 77. Both pass Ikea, but their frequency is not very frequent. You can always check bus schedule at Star website.

There are 5 big supermarkets in Rennes:

Carrefour -Okay, everybody knows that Carrefour is French company and it’s huge. But according to my teacher, the biggest supermarket in France is not Carrefour, but Leclerc. In Rennes, there are 3 kinds of Carrefour depends on their location. There are Carrefour, which only located in Alma -a peripheral of Rennes. You can take bus no 3 to go there and it’s the last stop of the bus but it’ll take around 40 minutes to go there from city center. That’s why a lot of people bought a shopping trolley which costs around 15-35 EUR so they can buy a lot of things in one go, because the further the supermarket is, the cheaper they are. The second cheapest Carrefour called Carrefour Market, located in Charles de Gaulle Area (bus no 1 and 9, or metro) and Place des lices (bus no 2). The most expensive one is Carrefour City, because the format is convenience store and located in the city center. I have one nearby my campus, in Guehenno area.

As a price comparison, a private brand orange juice (Carrefour brand) costs around 99 c in carrefour city, 91 c in Carrefour market, and less than that in Carrefour Alma.

Leclerc -This is the cheapest supermarket in town, but you need to go to their biggest store in Cleunay (Bus no 9, last stop). Actually, for me there are some things that are cheaper in Lidl, but their range of products is not complete. Such as you can buy a pasta for 40 cents, but you will find difficulties to find pasta sauce. Therefore if I want to buy a lot of things, include toiletries, I always take my time to go to Leclerc.

Super U -This supermarket is a bretagne local supermarket. They are famous of their well made private brand, from all ranges of foods to toiletries. I doubt private brands before, but after trying their soap, I feel like having a bath in a flower tub. I also adore their yoghurt, I personally think it’s better than Danone and it’s cheaper! Their lasagna is also very good. They have 3 different levels of private brand: Saveur U (the most expensive and well-made), U (medium level, but I always buy this one), and Bien Vu (lower quality). 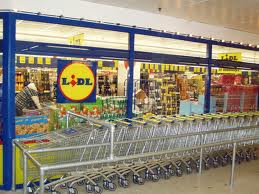 Lidl -This one is a German supermarket and they can be ridiculously cheap but mostly their brands are unknown, most likely imported from out of France. You can go here to buy meats and some vegetables, but it’s pretty far..

Intermarche -this supermarket is also pretty regional, but they are located very near to my beaulieu so I often go there. In fact they are my savior because I bought my first equipments here, 1 day after arrived in Rennes! They are not cheap, obviously.. but not ridiculously expensive either..

Below are the shopping guidance in Rennes: 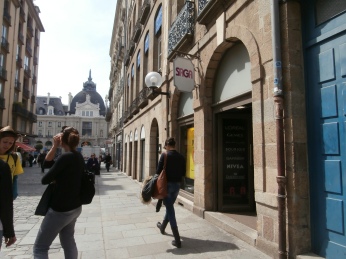 SAGA is located right besides ZARA

SAGA – this store located in the middle of Saint-Anne and Republique, you can find it easily because it’s very near to Zara. They sell a very cheap cosmetics, even cheaper than any supermarket (usually in France, the same products has different price when sold at cosmetic counter in Lafayette or Monoprix and it is cheaper to buy them the supermarket although the product is 100% similar). I think the reason is because their product is imported from Eastern European or old stock. One time I want to buy Maybelline eyeliner gel, but they only have black gold color instead of blackest black.

2 Euro store – this is the only 2 euro store I can find in Rennes, although I’m sure there are also 1 Euro or another 2 Euro store in the peripheral of Rennes. You can find big plastic ware or some home deco here. Just walk from Zara to the left, then you will see a store with blue banner like this:

This store located right across republique. You might miss this store because it’s pretty small

La Visitation – This mini-mall contains H&M, Bershka, Pull&Bear, Italian cosmetic brand “Kiko”, electronic shop “Boulanger” and so on. This mall is super small, but if you need a quick grab from the city, you can just stroll here! And for H&M, it’s good to check their store every week because they always have a sudden sale! 🙂

Colombier – This shopping mall is quite big for Rennes size, because it’s very hard to find a big mall in this city especially the one who has more than 1 floor.  You can find monoprix, yves rocher, Andre, H&M, McDonalds, etc here. By the way, McDonalds here open from morning ’til 11 PM and they also open in Sunday. So it’s pretty helpful if you need wi-fi during weekend or night, just buy a cup of coffee or ice-cream then you can enjoy surfing the net for hours!

Saint-Gregoire Mall – Actually I am not sure about the real name of this mall, because their name is not visible on the building itself. They have MANGO (yay! for me, this is the closest MANGO store even though they have 1 section in Lafayette but it’s very small), Leclerc (however, I had a feeling that Leclerc in this mall is a bit more expensive than the one on Cleunay), H&M (ppsstt.. whenever your favorite stuffs out of stock in La visitation or Colombier, you can always go here and usually they have the stock! The reason is because this H&M store is less crowded than the others), Cache-cache, and some other stores.

Alma – This mall is basically Carrefour and some other stores. They also have Go-Sport, a sport apparel store. I bought my nike shoes only for 30 EUR here! *big grin*. They also have MANGO, NAF-NAF, etc.

Cleunay – This mall also basically Leclerc with some other stores, such as Promod. I personally think Leclerc is the cheaper and biggest in town.

I guess that what people said when something does not happened as expected!

It’s unavoidable and can be.. annoying!

I was prepared for my job interview today. I woke up 1 hour before, getting ready, make sure I looks perfect on the camera. But time went by, it was 10:10 AM (supposed to be 10 AM) and nothing happened!

I had a bad feeling, then I contacted the recruiter to ask. She was surprised and she said she’ll get back to me. I ended up waiting ’til 10:30 AM, and I need to go to the toilet. I was shocked to see my Gmail when the recruiter said I didn’t pick up my phone, indeed my phone was with me all the time (except when I went to toilet, obviously..). The interviewer called me 4 times, she said. I didn’t receive any call. I was really confused because I don’t know what to do! And she said, he kinda upset because of that.. well, that’s not my fault.. So both sides are kinda upset now, thanks to technology! 😦

I feel like this is a jinx or hiccup, or whatever people wanna call it.. and it feels baaaddd when you prepare for something but it’s being delayed or postponed. But I was praying before and ask God for the best thing to happen. If I have faith, that means I believe that this happen for a reason, a good reason.

Therefore, put my smile and carry on!

stories of my life….